I've embarked on doing a single nut rear axle conversion to my 6th Gen/5th Gen VFR825. Mohawk did it a couple of years ago and I used his ideas but ended up with a brand new RC45 rear wheel instead o

Here are a couple of shots of the complete bike. Left and right. 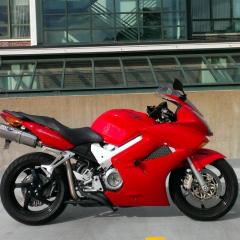