Today, in preparation for my trip to the MotoAmerica race at Laguna Seca I did an oil & filter change (Motul 4T 10/40 + oe Honda filter), and cleaned & lubed the chain. Of late I've been using 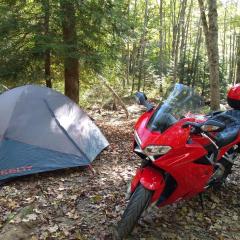