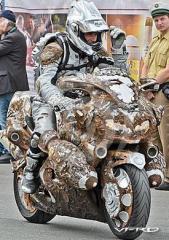 In fact, the Honda sevice tech quoted me one hour to do the full warranty repair, which I was a bit surprised by. It would take me an hour just to clear my workbench, read the manual, and crack open

here's a copy of the service bulletin for the recall VFR1200 Propeller Shaft Repair Method.pdf these are from Honda in Australia SBMC1525-VFR1200 Drive Shaft Recall.pdf looks like they don't hav