FI light stays on after replacing with LED 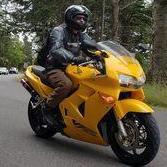