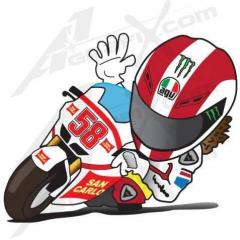 Just wanted to share some pics I've taken over the years.   Almost exclusively US tracks but maybe I'll throw in some paddock stuff here and there.  As I go through my stuff I'll post a few every so o

If that can of worms means more pics of racing and everything else about m/c racing then that is a can I would love to open.   Podium for Miller Race 2? Spies, Fabrizio, Rea.  I was there as