Vote For Kaslo, Bc As Canada's Most Rider Friendly Community 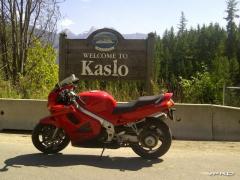