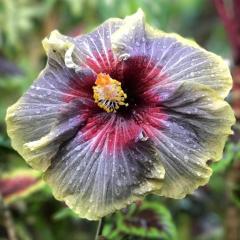 Titanium I prefer to call it.    The DAM sounds ridiculously good too. Every time I cane it (every time I ride it) and hear the noise, a little bit of wee comes out. ☺️😉

Small update. The video which I uploaded to YouTube now has three comments from people saying they have the same noise. So I’ll just assume cam chain rattle is normal on these bikes, even if it does i