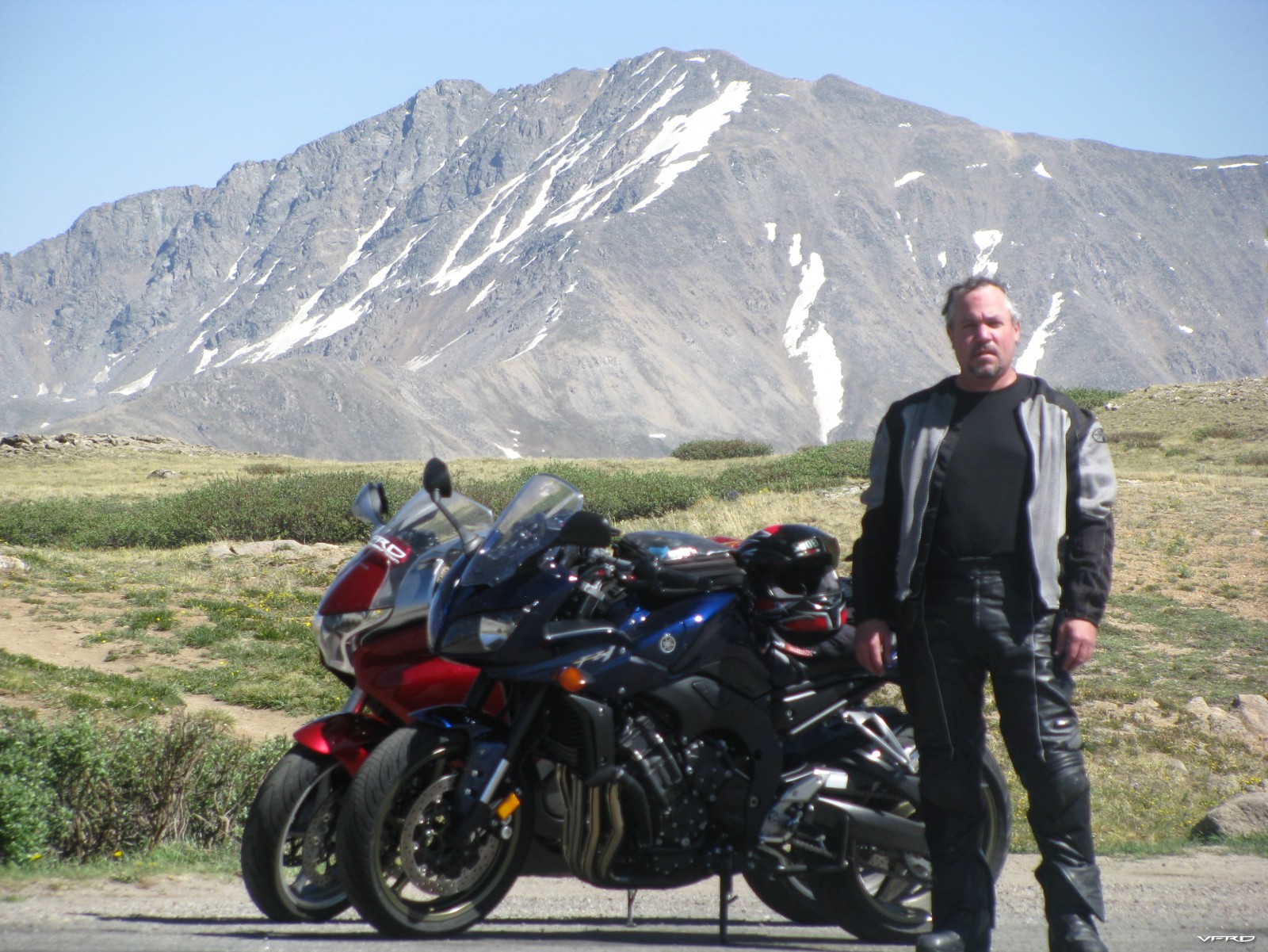 Every year for the last 9 years Reddog and I have done a run across the state of Colorado for an all day 500 plus mile ride. Usually its a ride to the Black Canyon and Back and its always right around fathers day - he gets a kitchen pass every year to go. This year was no exception, I invited a few other riders but life got in the way and it was just Bill and I again this time. We had to make a decision since half of the state of Colorado is currently engulfed in smoke from wildfires we had to figure out how we were going to do this.


This year we had to avoid the smoke from the Springer fire that was burning on the backside of 11 Mile Canyon so we just headed up hwy 24 and avoided the closed roads and all the smoke we could then looped over to Pagosa Springs and did the loop clockwise. I recently bought a set of blue tooth Sena communicators and well Bill wasn't too interested at first but warmed up to it after a 100 miles in and decided to give them a try. I bought a set so we clamped the thing on when we got to Gunnison and boom we were talking and riding and they performed very well, I had mine on the whole ride 11 hours and it worked great! I listened to music, spoke to Bill and pointed out road hazards when I lead and he the same, wow its so much easier to figure out whats going on when you can just push a button and start talking about what is going on!

I dont think we ran into a cop anywhere we usually expect them, and the ones we did see were marked well ahead by our two radar detectors, I could actually hear his detector go off since he has a speaker in his helmet so I could watch my flashing indicator and hear his. I have yet to figure out how to get the sound of my TPX radar to work with the Sena? Maybe somebody reading this has already solved that problem and can pass along the secret? His radar kept giving false laser signals every time the sun was behind us, we figured it was probably the sun reflecting in his rear view mirror and the way he had it mounted on his tank? Bill was getting annoyed with it not sure if he figured it out yet? Sena sells a bluetooth adaptor for inputs signals but its a bit pricy, I might have to go that route for the radar but I think I will wait a bit first. 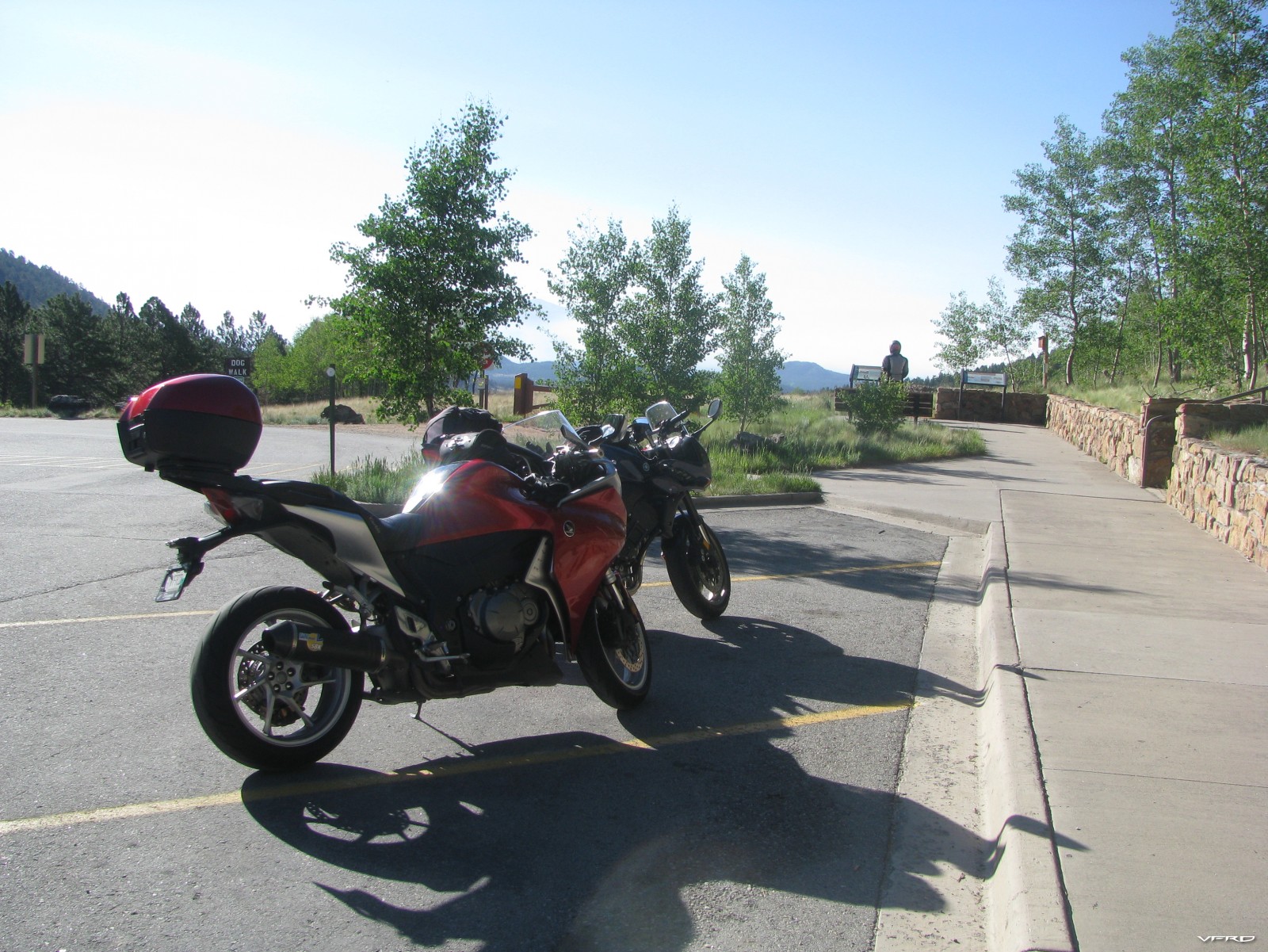 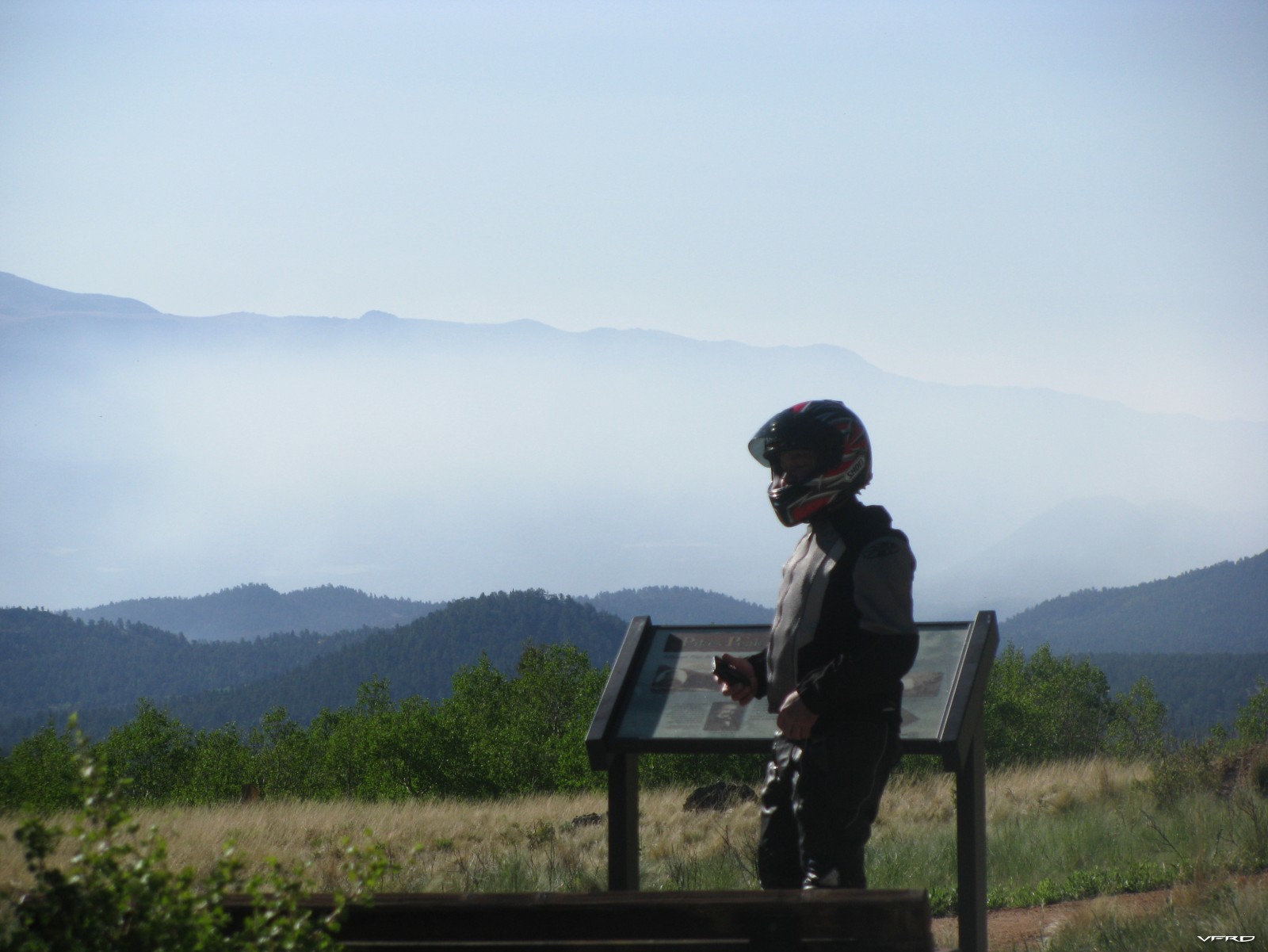 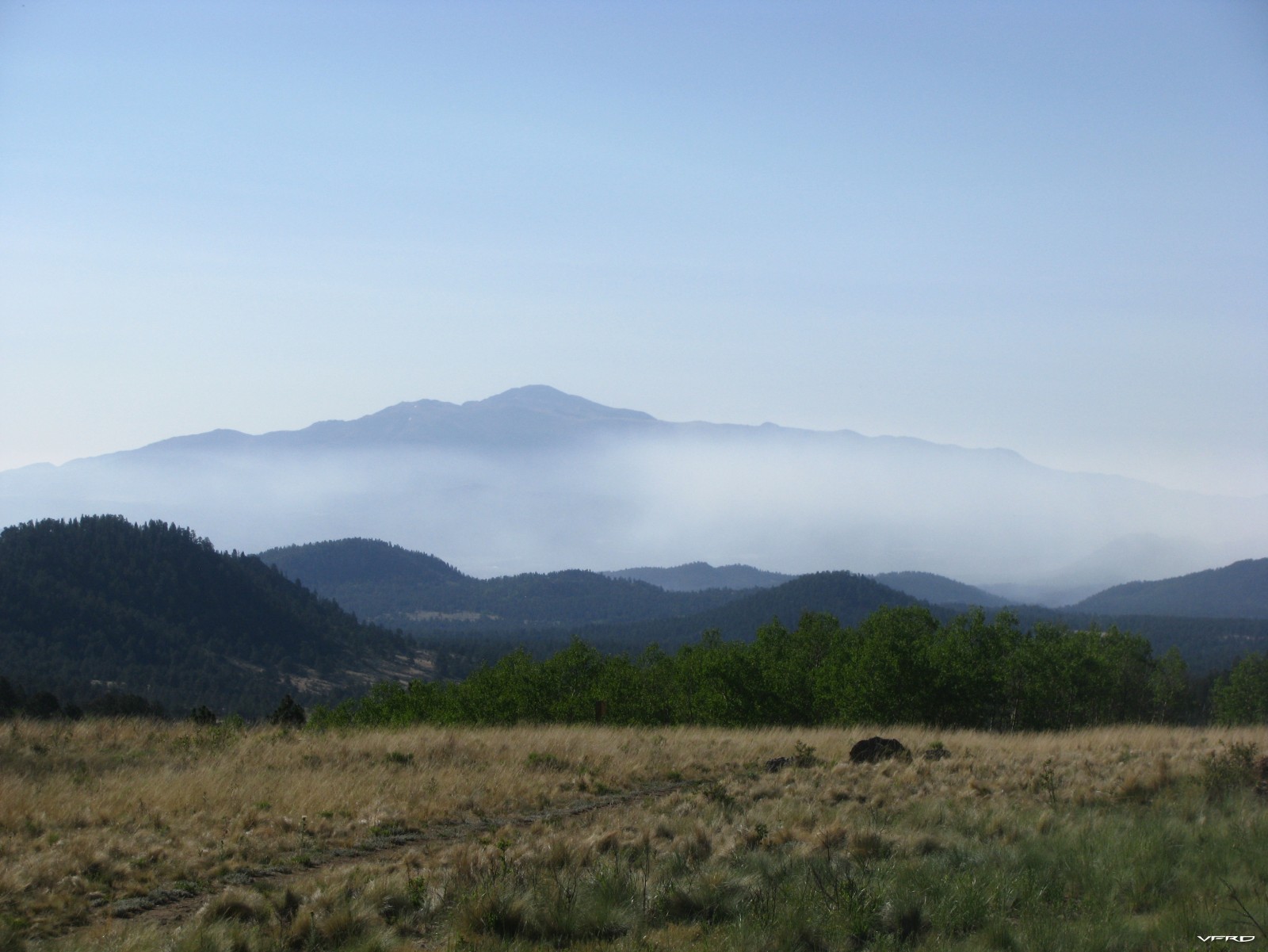 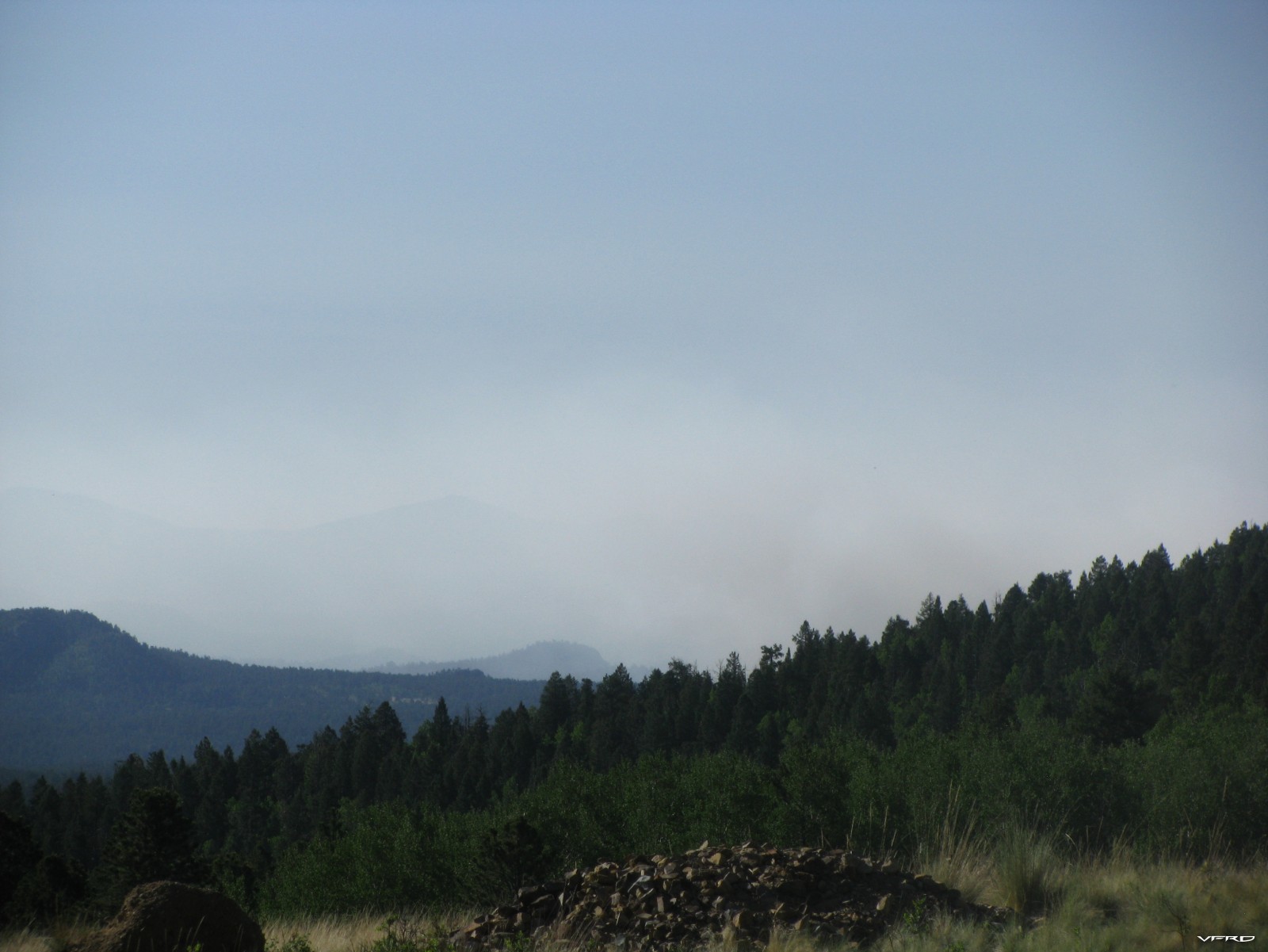 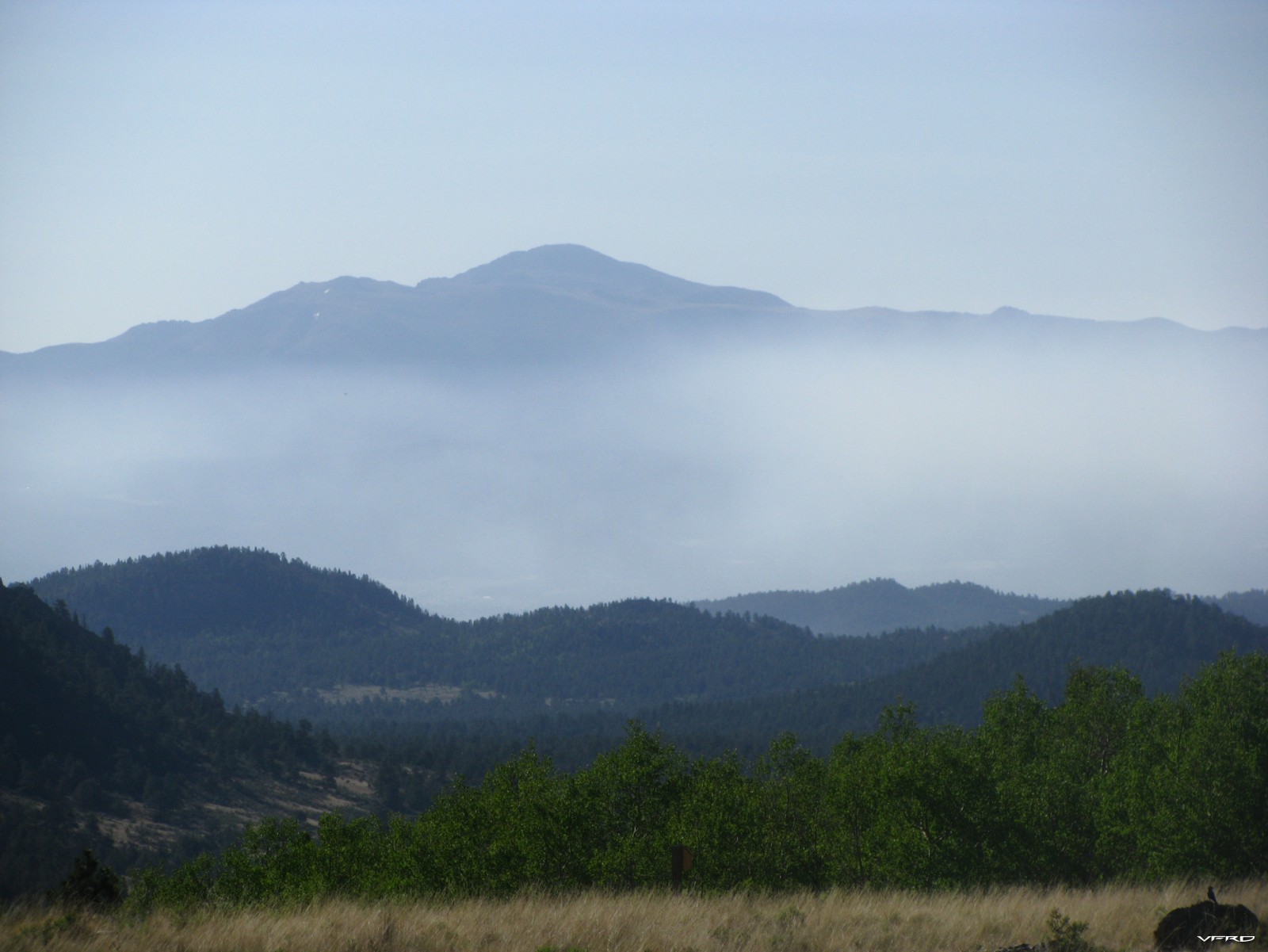 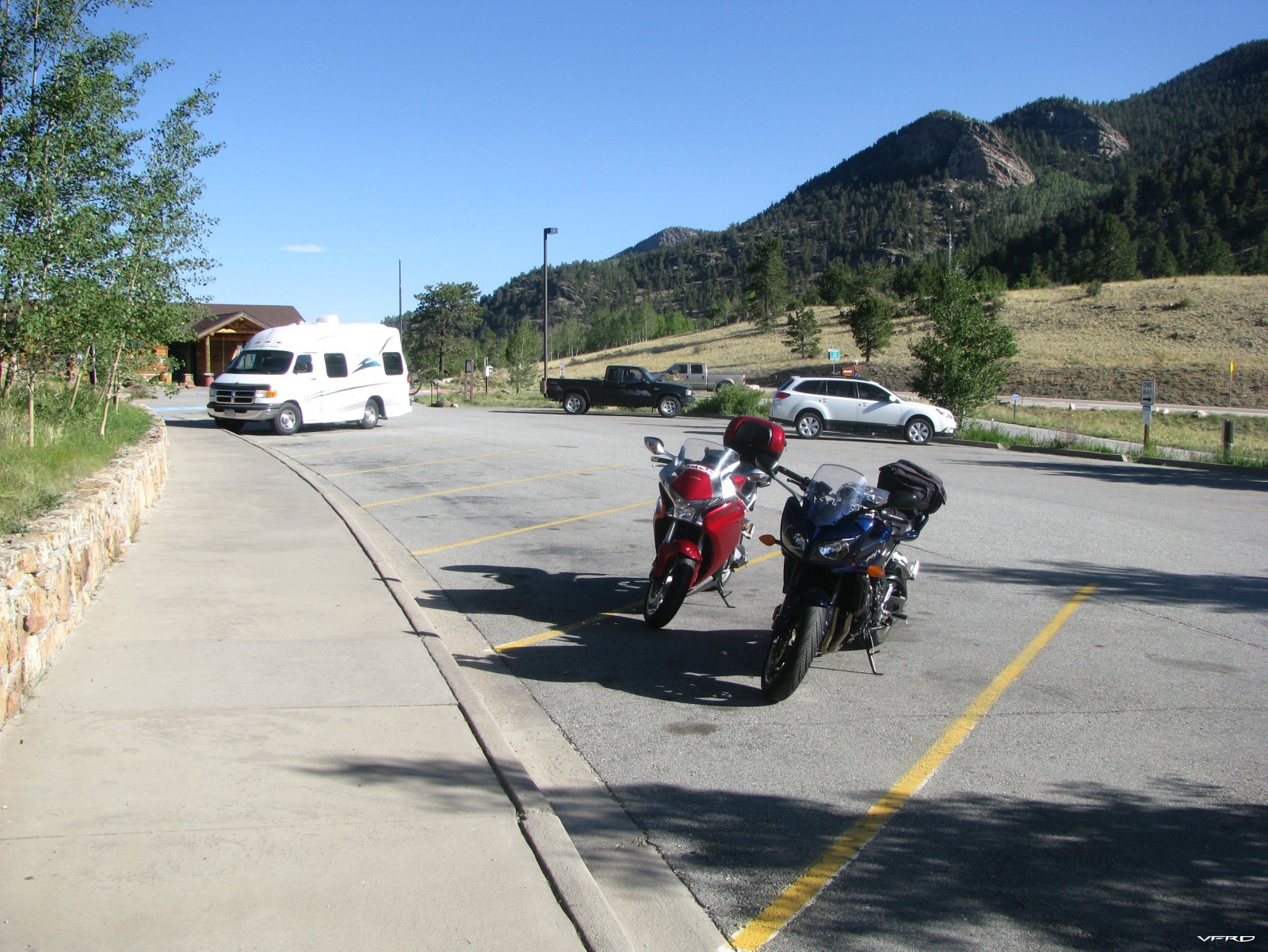 As you can see from the pictures Bill was riding his 09 FZ1 and not his VTEC, he said he needs new clutch plates for the vfr before he can ride it, it was sort of an enigmatic ride on the FZ1 this time riding roads he is not as used too so he couldn't get his body position right for some of the tight sweepers we were riding, the wider bars and more upright position was giving him fits and he was inadvertently making steering inputs on the bars and making some turns unstable due to being in an uncomfortable position he said, we usually take the Canyon about 10 mph faster in some of the turns - well I charged a few corners too hot myself but all in all we always take it easy in the straits around 70-80mph and just dont slow down for the turns so its challenging but not a brake fest, just a pace type of ride - this road hwy 92 will bite you in the ass if you dont show a little respect, its a long way down to the bottom! 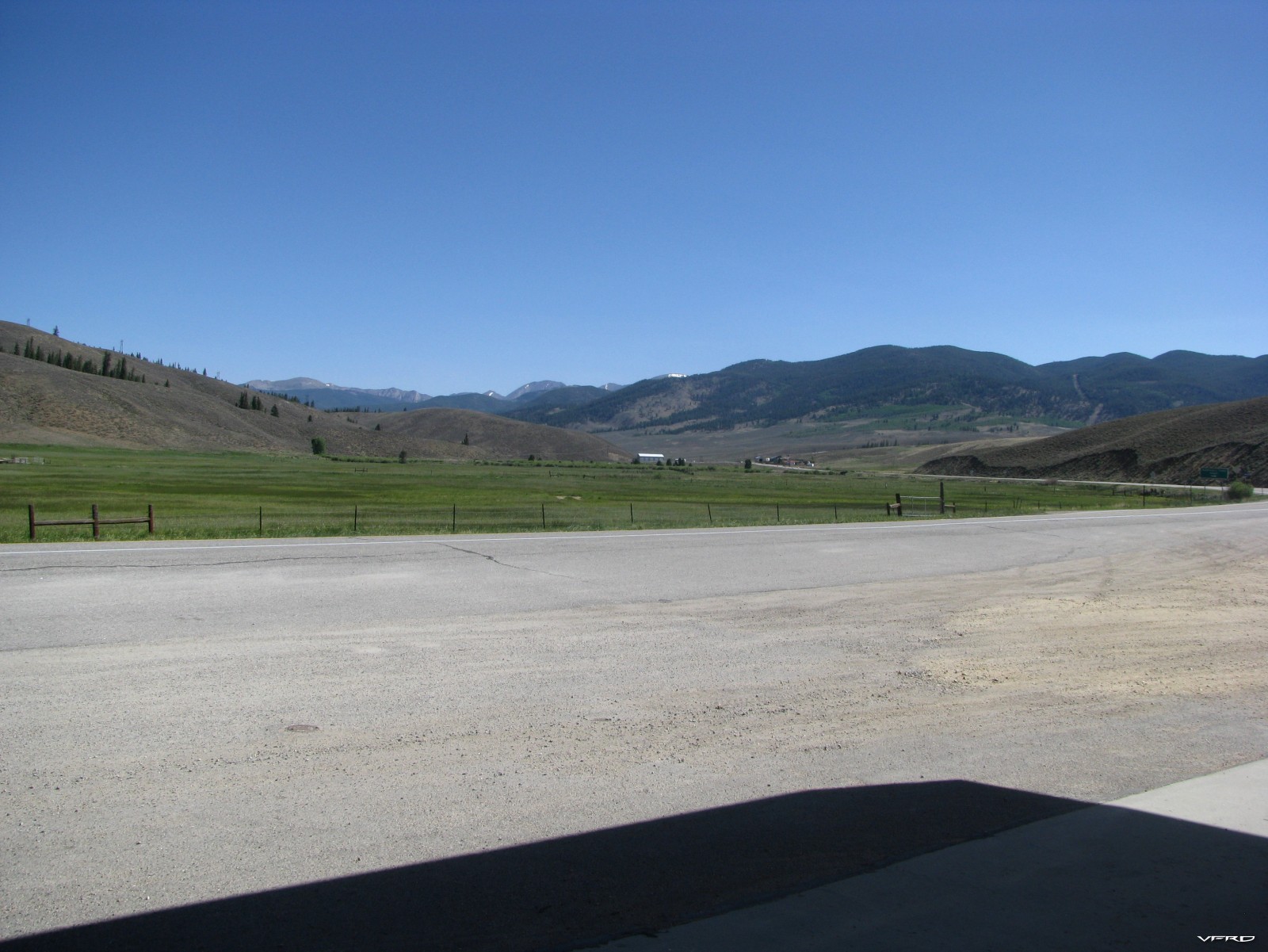 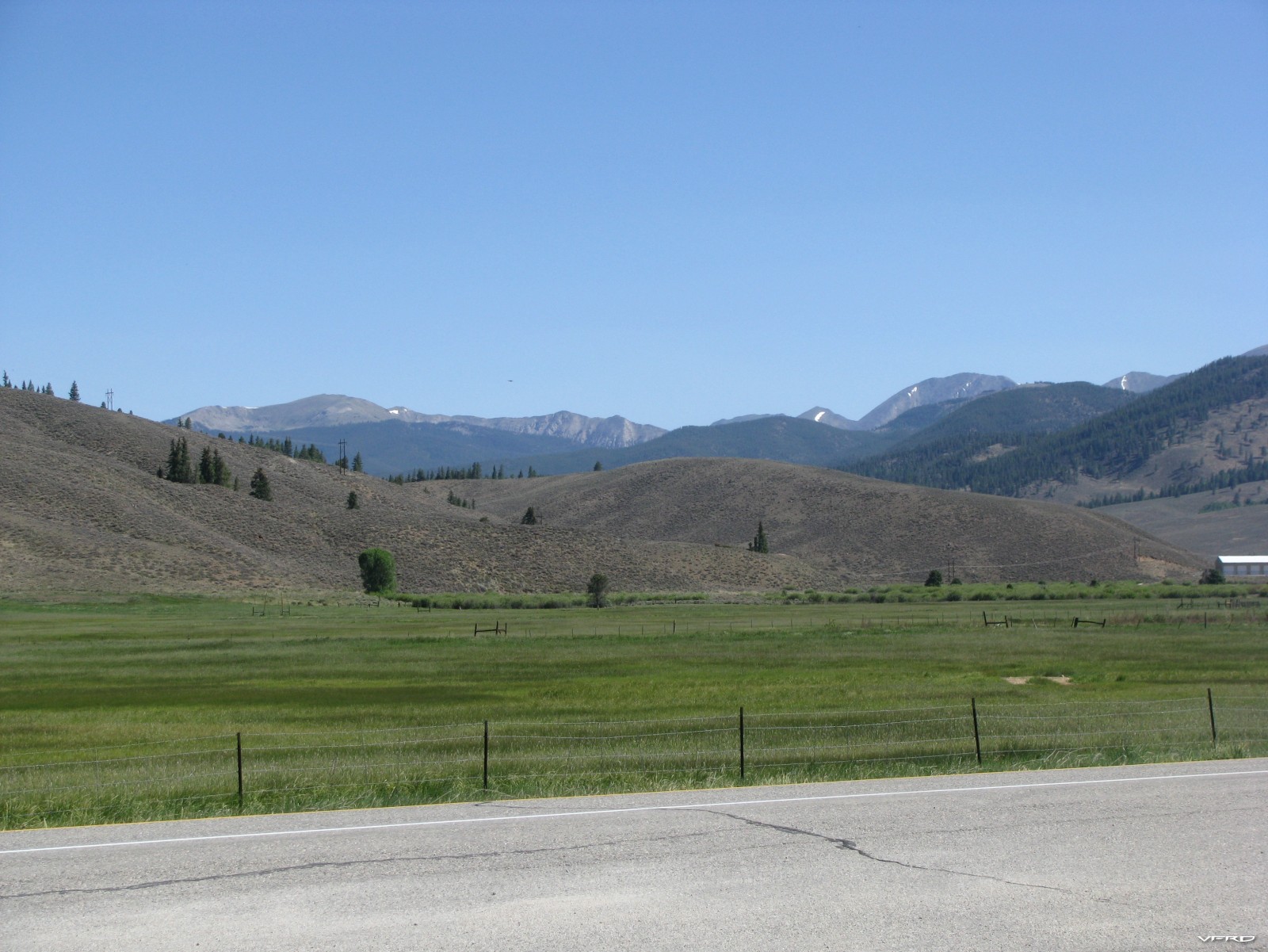 Bills FZ1 gets about the same gas range as the veefalo so we both tried to fill up at the bottom of Monarch Pass - but the gas pump was filling up so slow I barely got a gallon after 10 min, we gave up on it and decided to ride over to Gunnison and fill up there and get something to drink. There was a group of HD riders from Texas filling up also that we had passed and they pulled in after we had settled in a bit and I went over and talked to them, headed to the 4corners area they were in for a treat riding the Million Dollar highway -none of them had ever been on it before so I am sure they were about to be very pleased with their day!

It wasnt much longer we finally turned off onto hwy 92 and were on the Blue Mesa the Gunnison river below flowing into the Black Canyon, I love this road and was hoping that the chip seal they did last summer held up over the winter, it had indeed and was grippy and very good, a few spots I already knew about where the road had buckled from frost heave was still there and with the communicators I was able to point it out to Bill before we got there, so yea the Sena was great for that too. We had a safe but fun pace up the Canyon. I took video from the Damn up to about 3/4 of the way of the road to Hermit Point, cutting out the strait and boring parts. 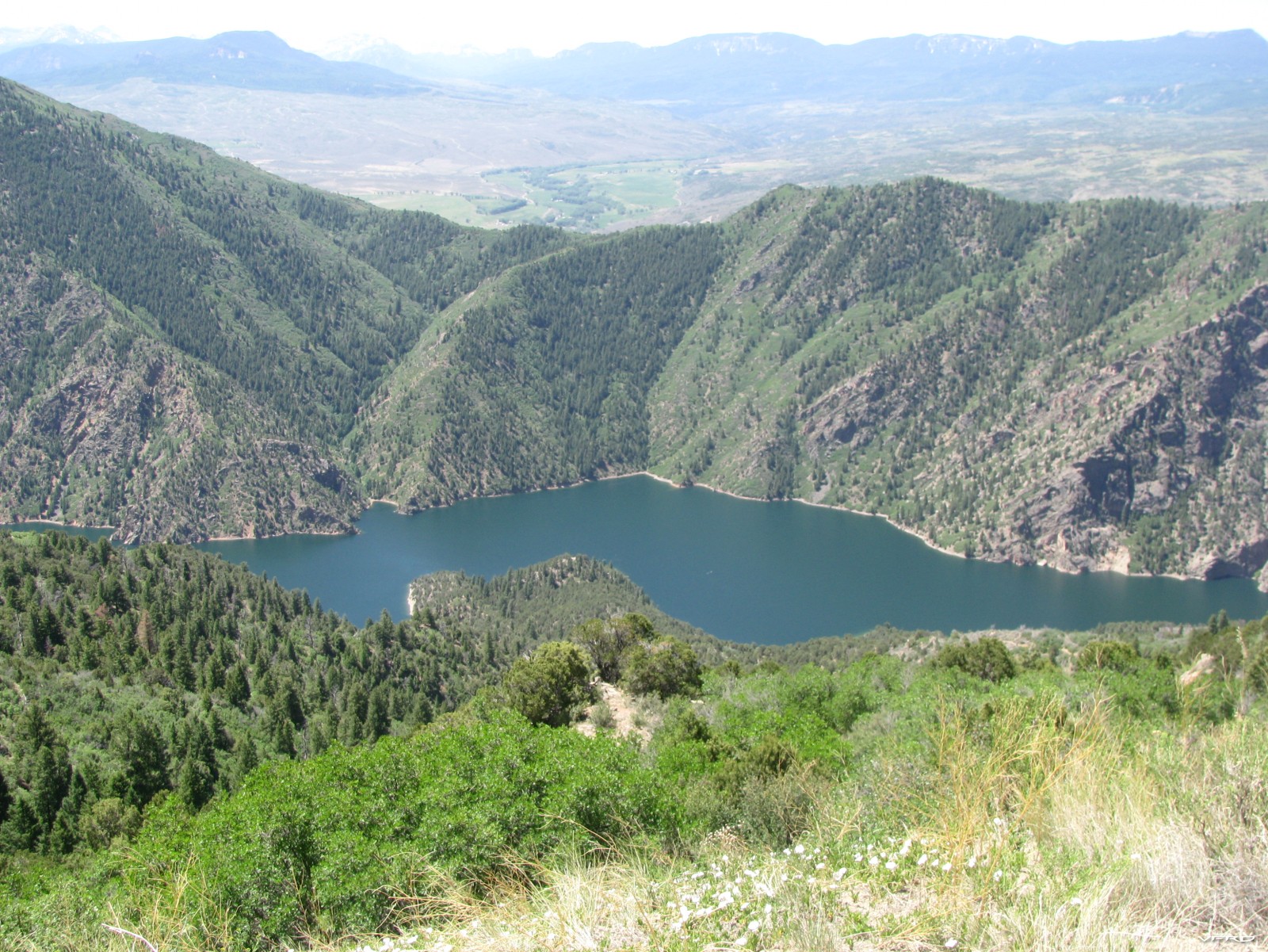 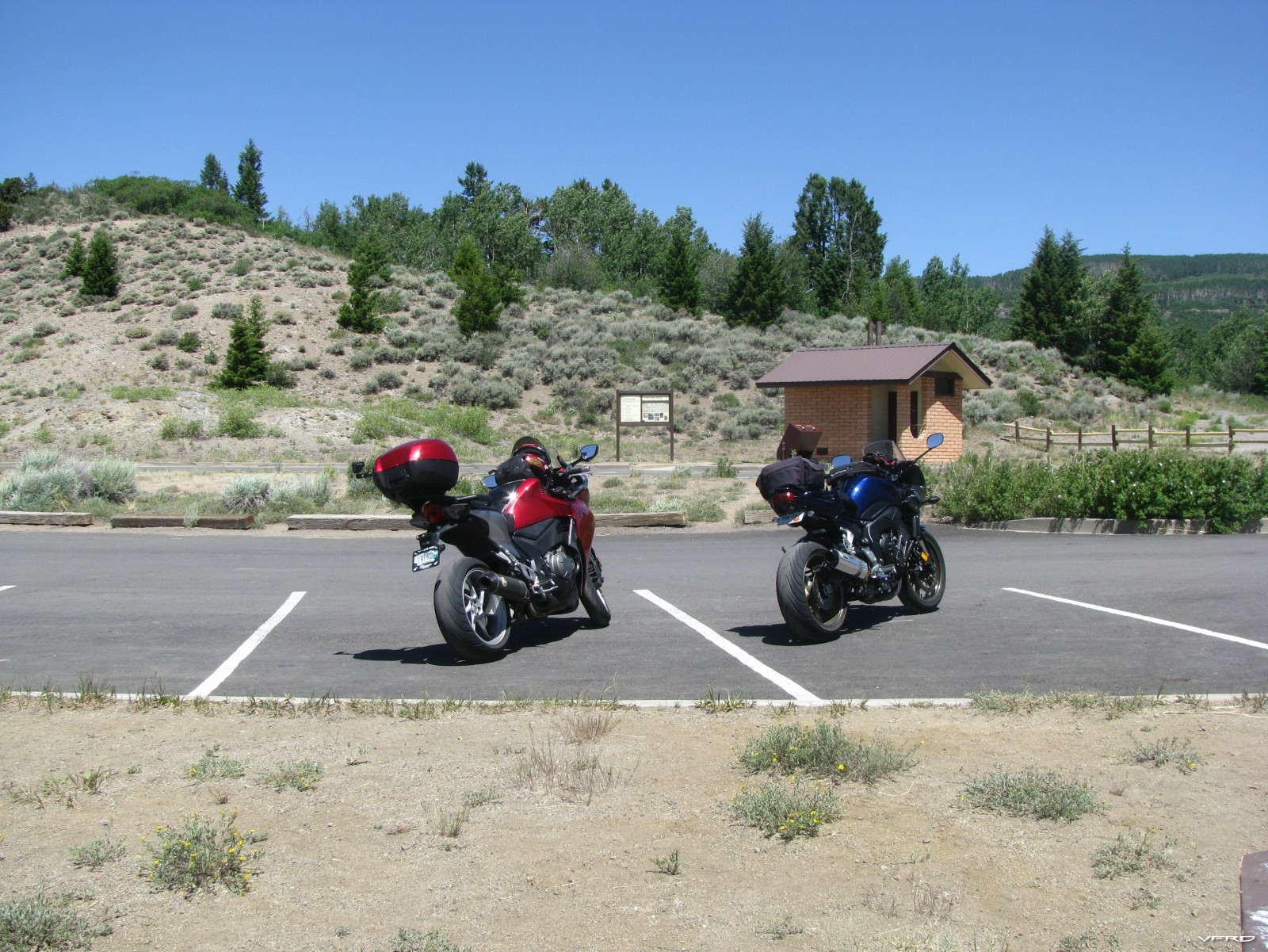 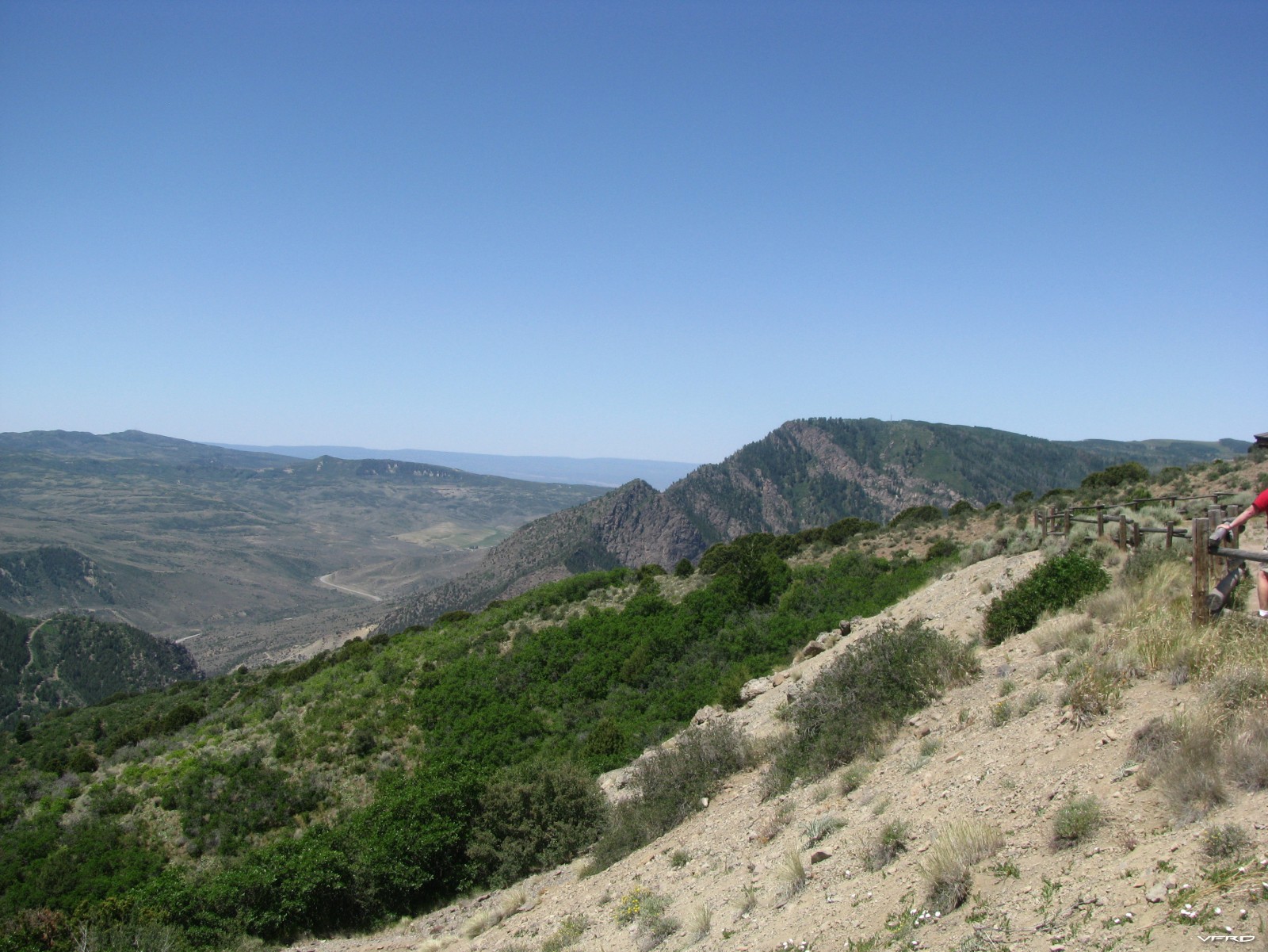 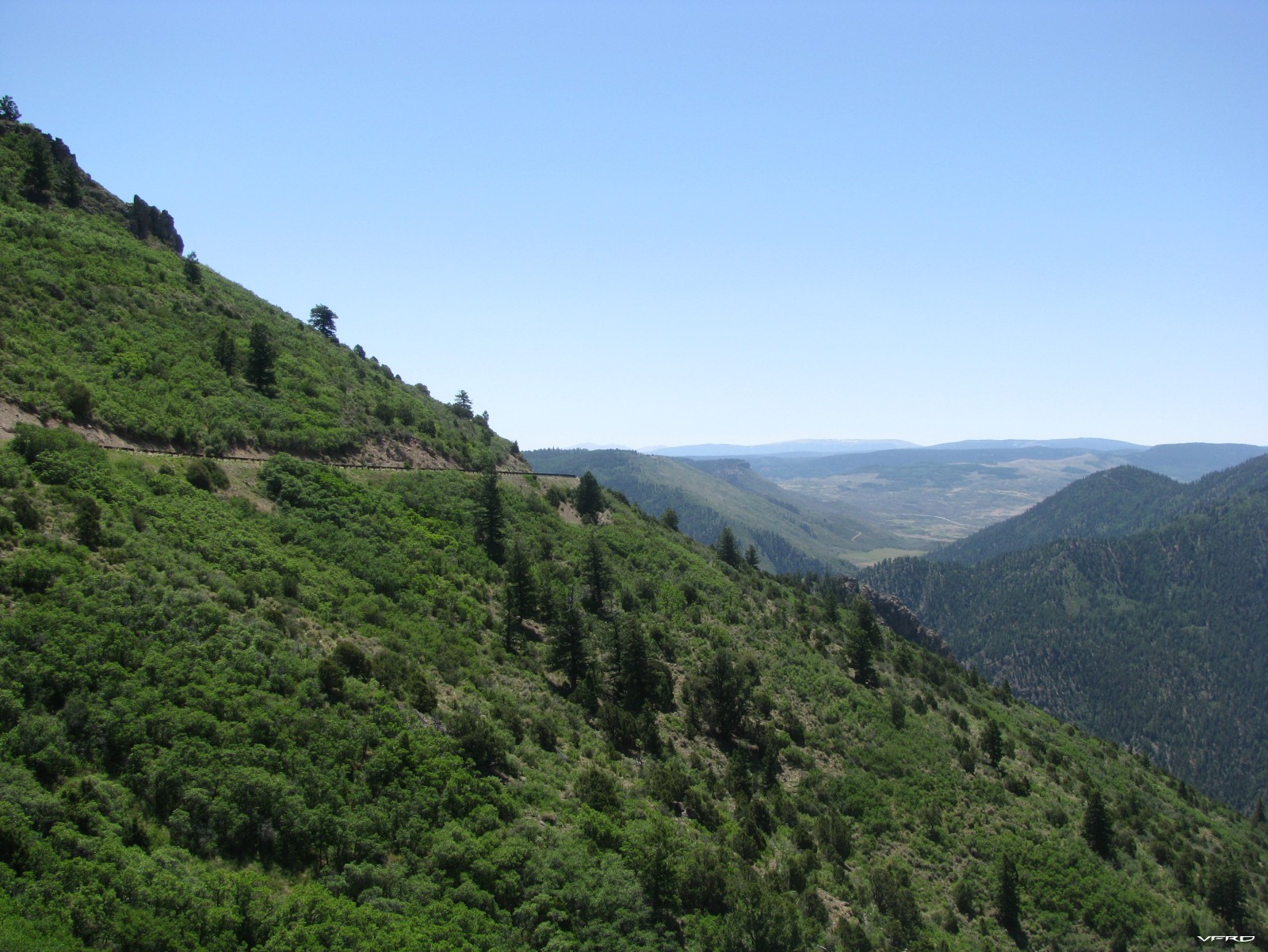 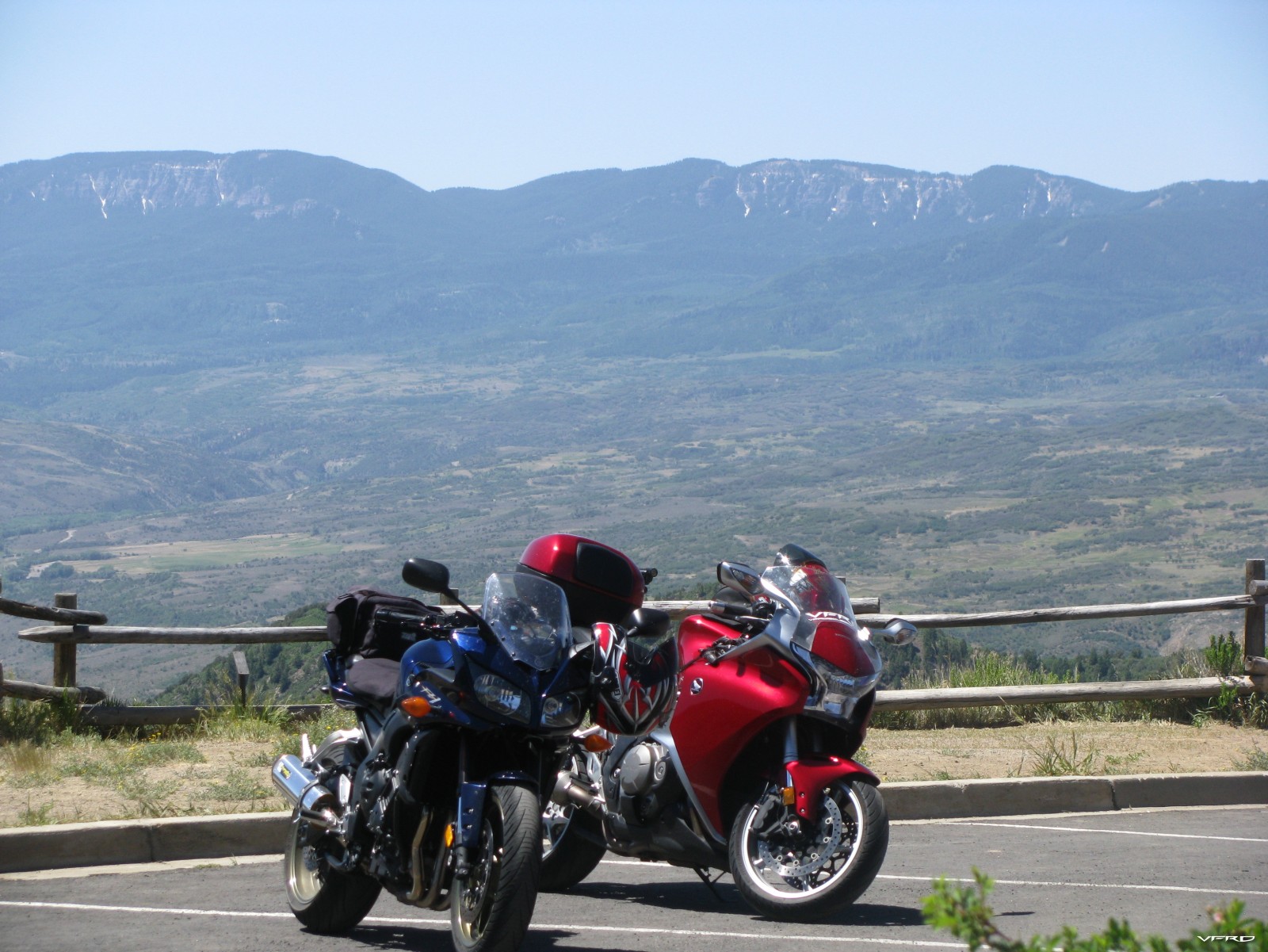 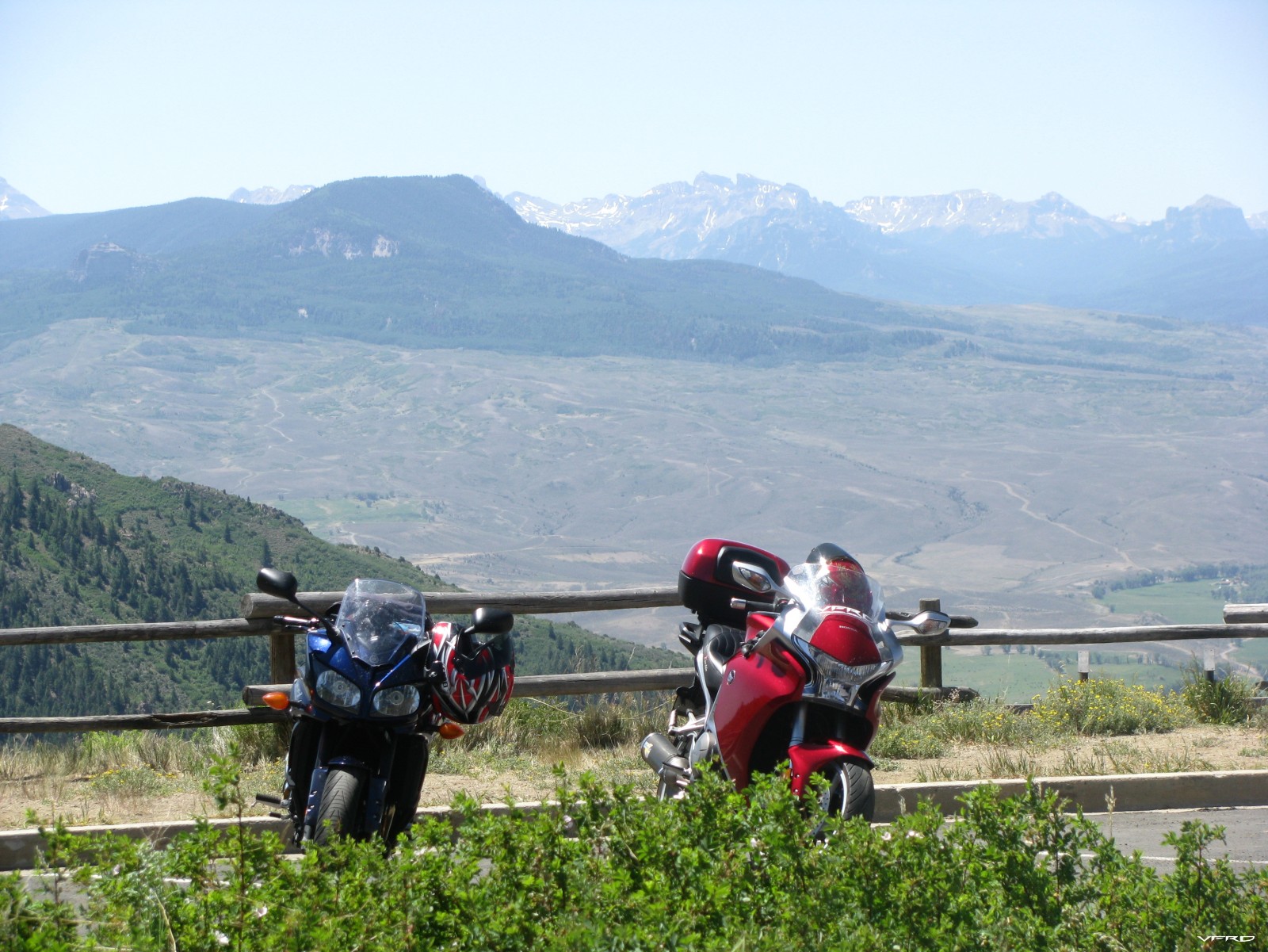 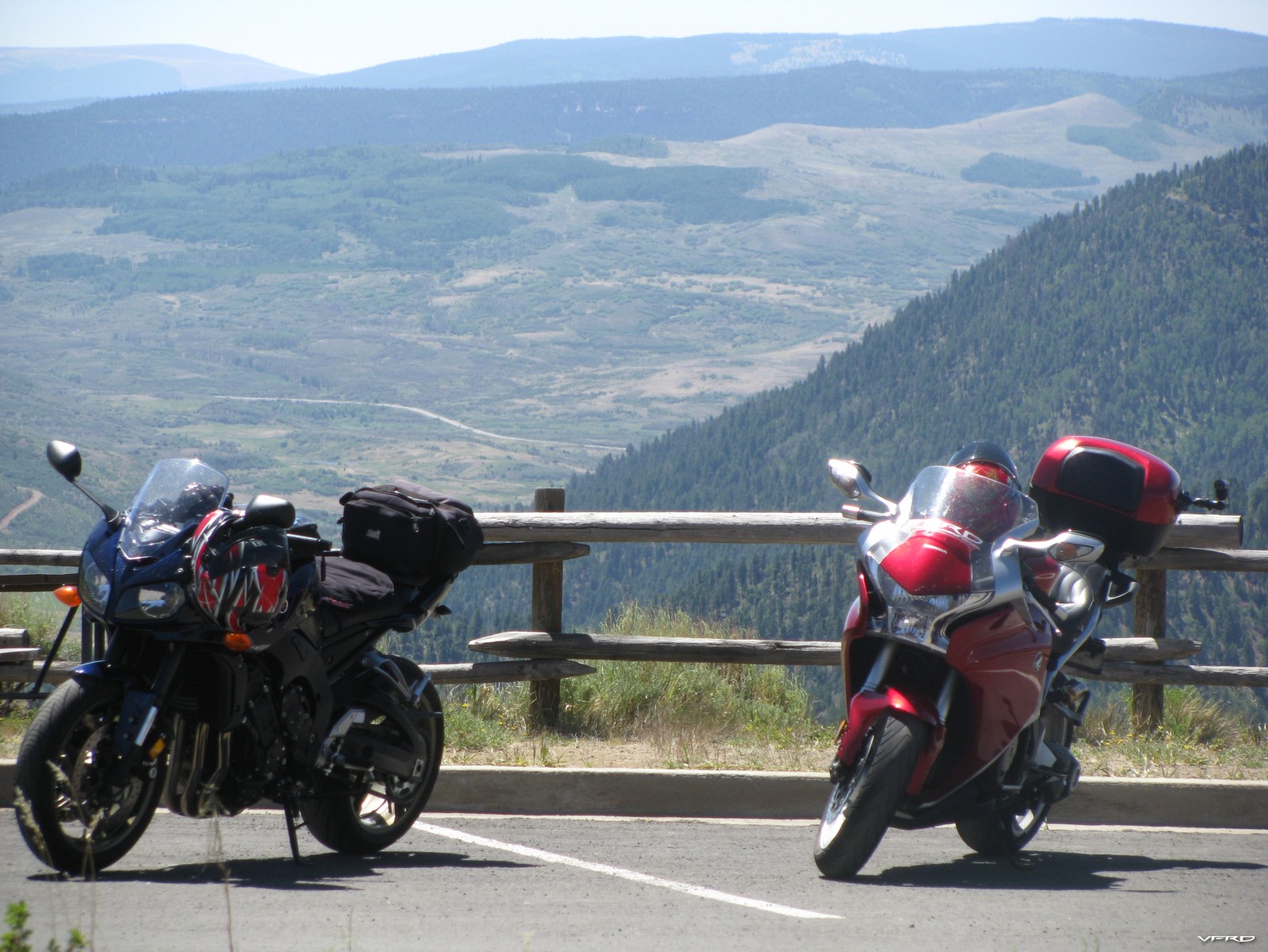 Then it was a hot and fast ride to Paonia for some lunch and then we headed up McClure pass past the Paonia Lake area for some more video, this time we attached it to Bills bike but it shook like a leaf on a tree and the video card came out about 5 min into it and we missed the fast parts. There are some sweepers right after the lake that the veefalo just eats up, 60, 70, 90mph the bike just keeps creeping up in speed and eating up those tasty sweepers - many of my friends consider it thier favorite part of the ride, I sure as hell love that part all the way to the top of McClure pass on hwy 133. Too bad when it ends there is a mob of traffic and slab all they way from Carbondale to Aspen. 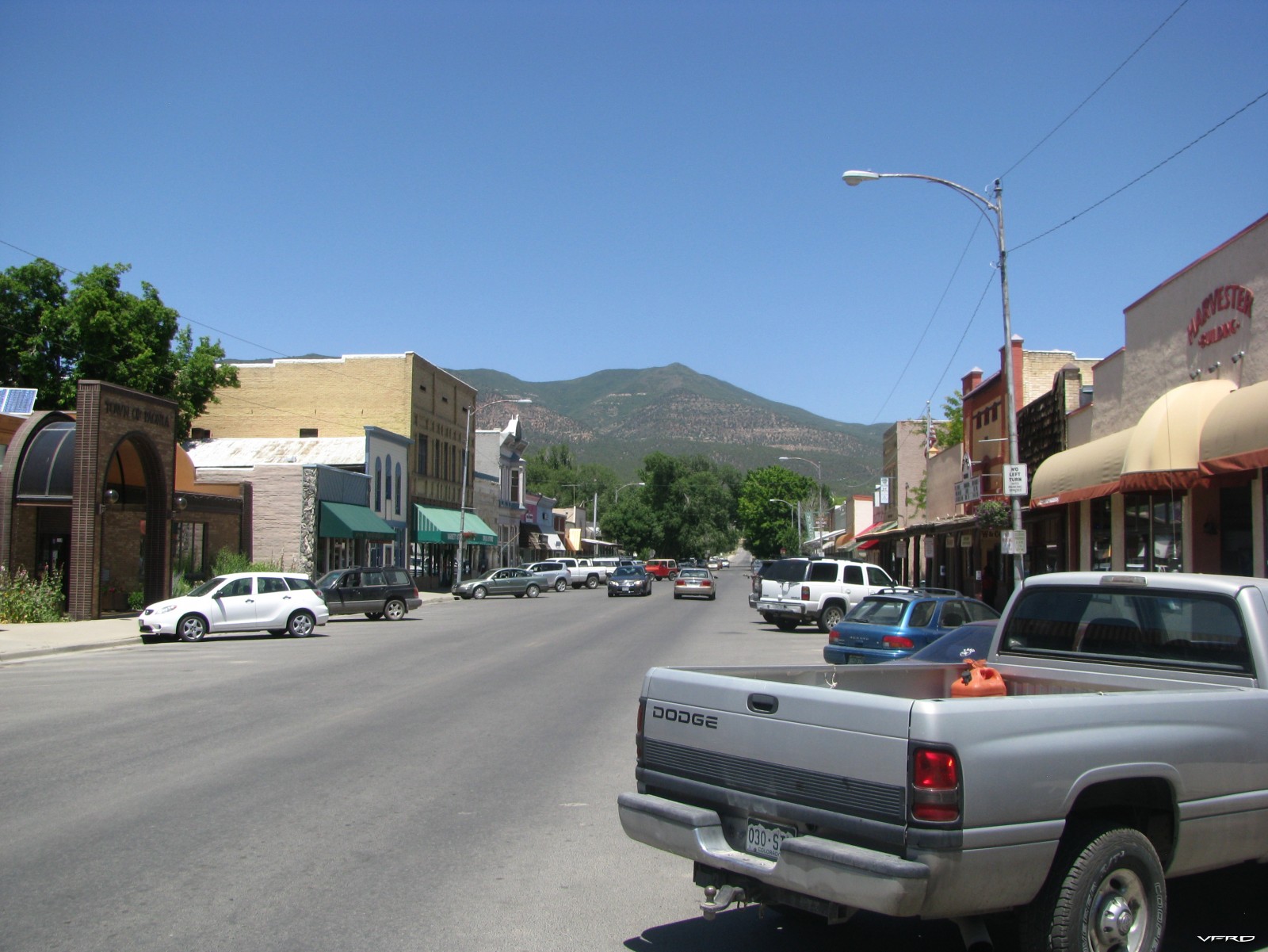 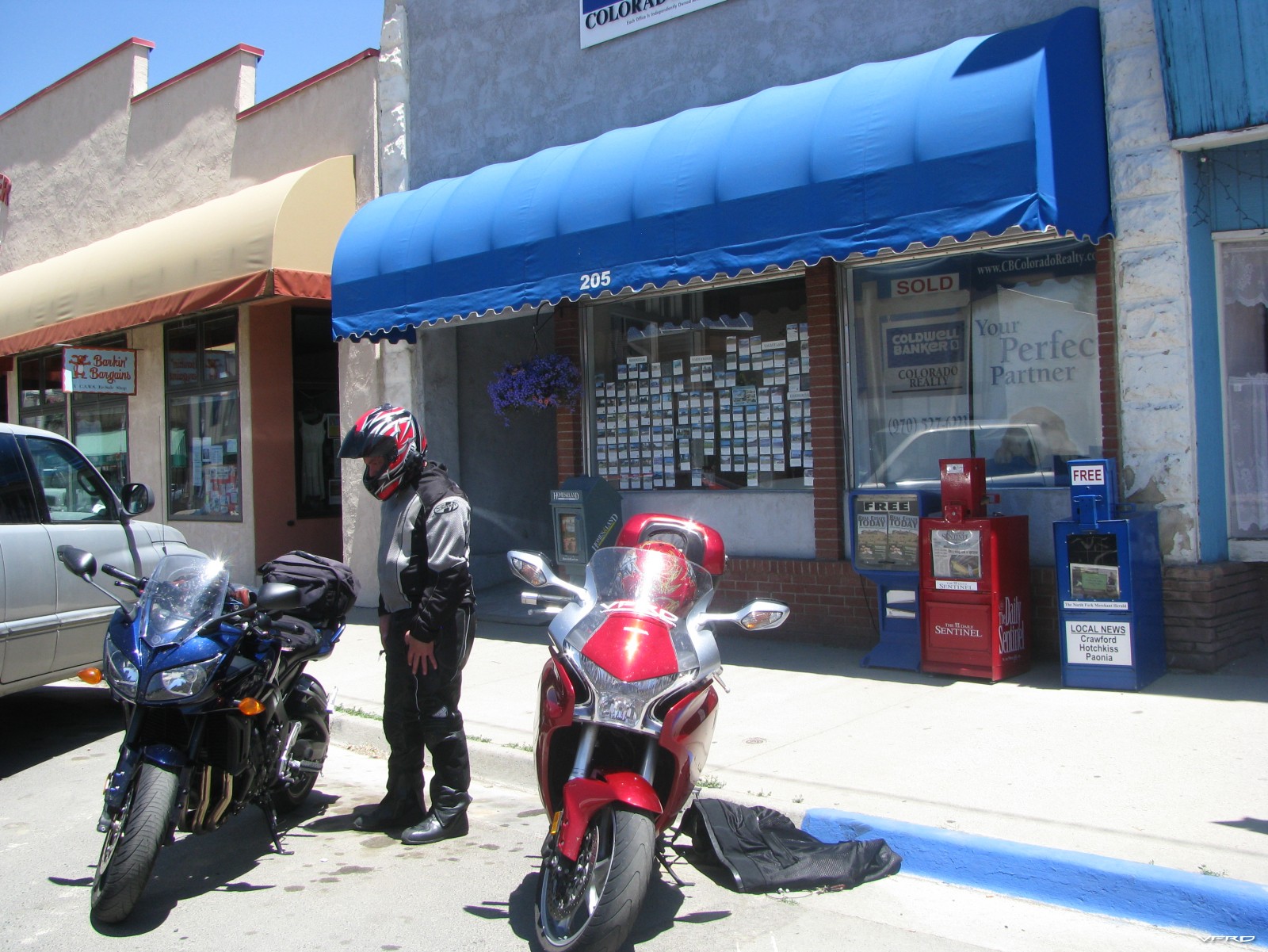 Lunch was pretty good in Paonia, just a mom and pop joint and a burger very tasty and great service, seems the only resturant in town and everybody including the town chief of police was there, it was funny a kid in a souped up ricer car was reving up his engine outside and the Chief got up out of his booth and went out and yelled at him BY NAME. Small town no doubt! The dude must have been 6 foot 8 and probably pushing 300lbs - Big dude I wouldnt test him!

Riding over to Aspen was tourture, it was hot and the traffic was thick, in town it was the worst, but we did see a few Aspen hotties on sidewalk, the scenery is great in Aspen in every aspect. Then we rode up Independence pass and got held up by a soldier in a Subaru who absolutely refused to use any number of the pulloffs as he drove just barely above the speed limit, the pass is very narrow and tight and lots of traffic coming down the other way so we just waited till the first opportunity, I was trying not to be disrespectful of the cagers all day but this guy was just not budging - first time we saw dotted line the RPMs maxed out and we were gone. Then was stopped at the top for a few shots and then back down we got in front of a VW golf what was not doing so bad following us, he would catch up on the super tight 10mph hairpins that drop off the side of the mountain and then we would be gone till the next one and finally he gave up chasing us down the mountain. It was actually very fun ride down this time, the bumps were smoother and they repaved some of the worst parts, the chip seal was in good shape on the Aspen side it was actually a fun ride over the pass. I cant complain other than the slab into Aspen it was a great ride all day long! We stopped one last time in Buena Vista for gas and I talked to a couple from Arizona riding together him on a KTM 990 and her on a Monster 650 they both seemed to be good riders. Must be nice to have a wife who can not only ride but keep up with you in the twisties! Super fun time - for those of you coming to the Summer Summit in August I can say that the Black Canyon is back up to standards! 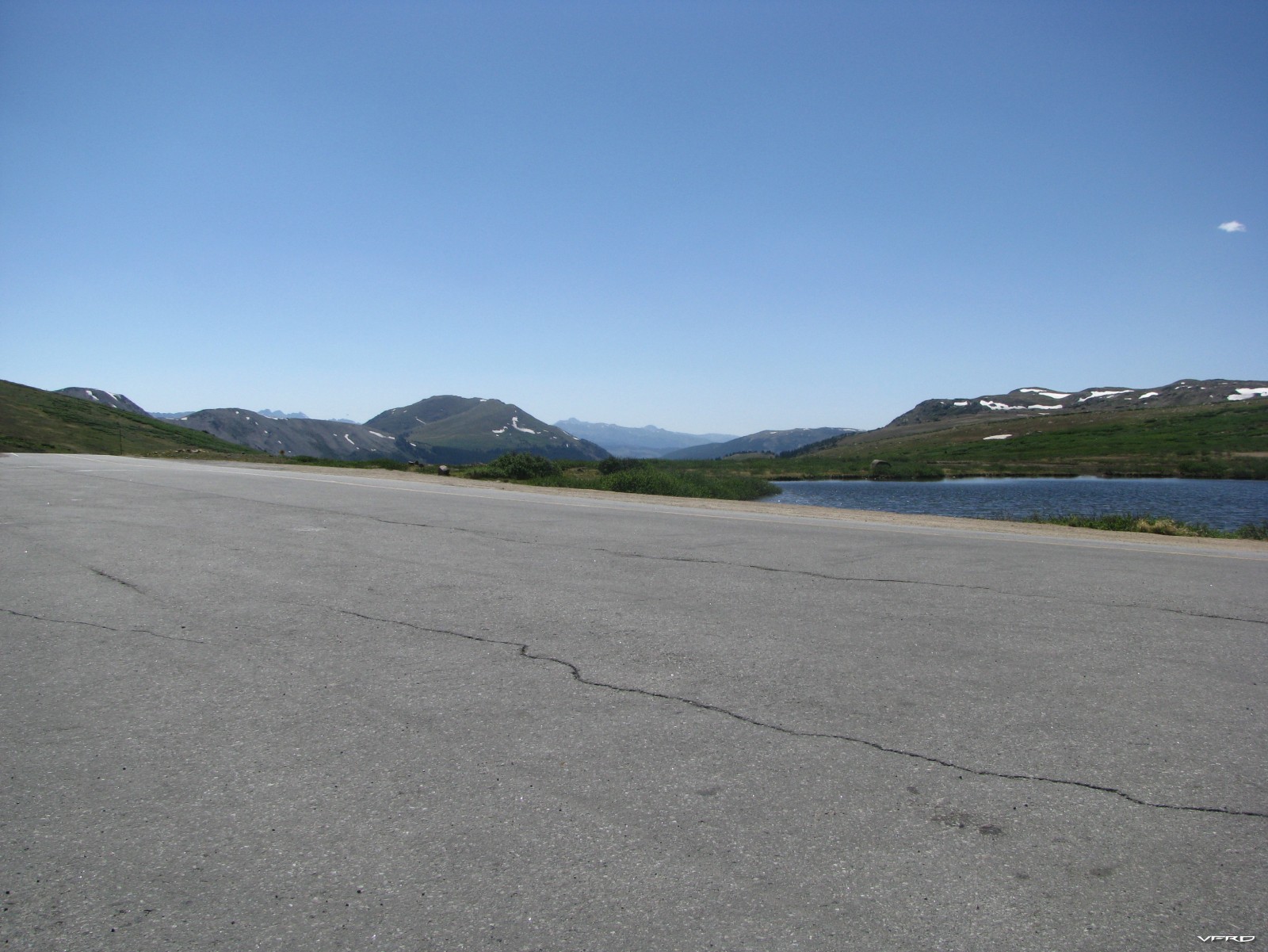 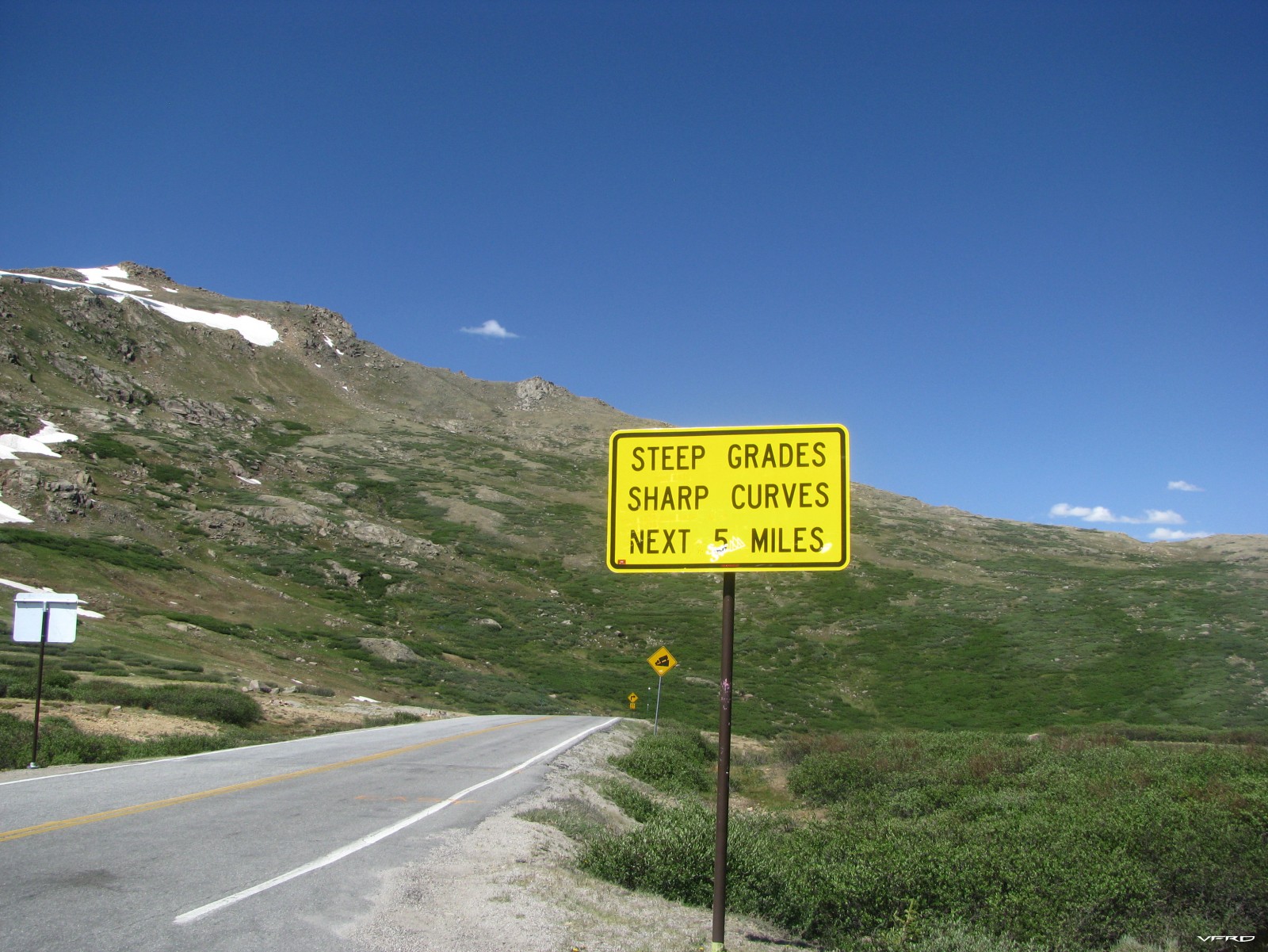 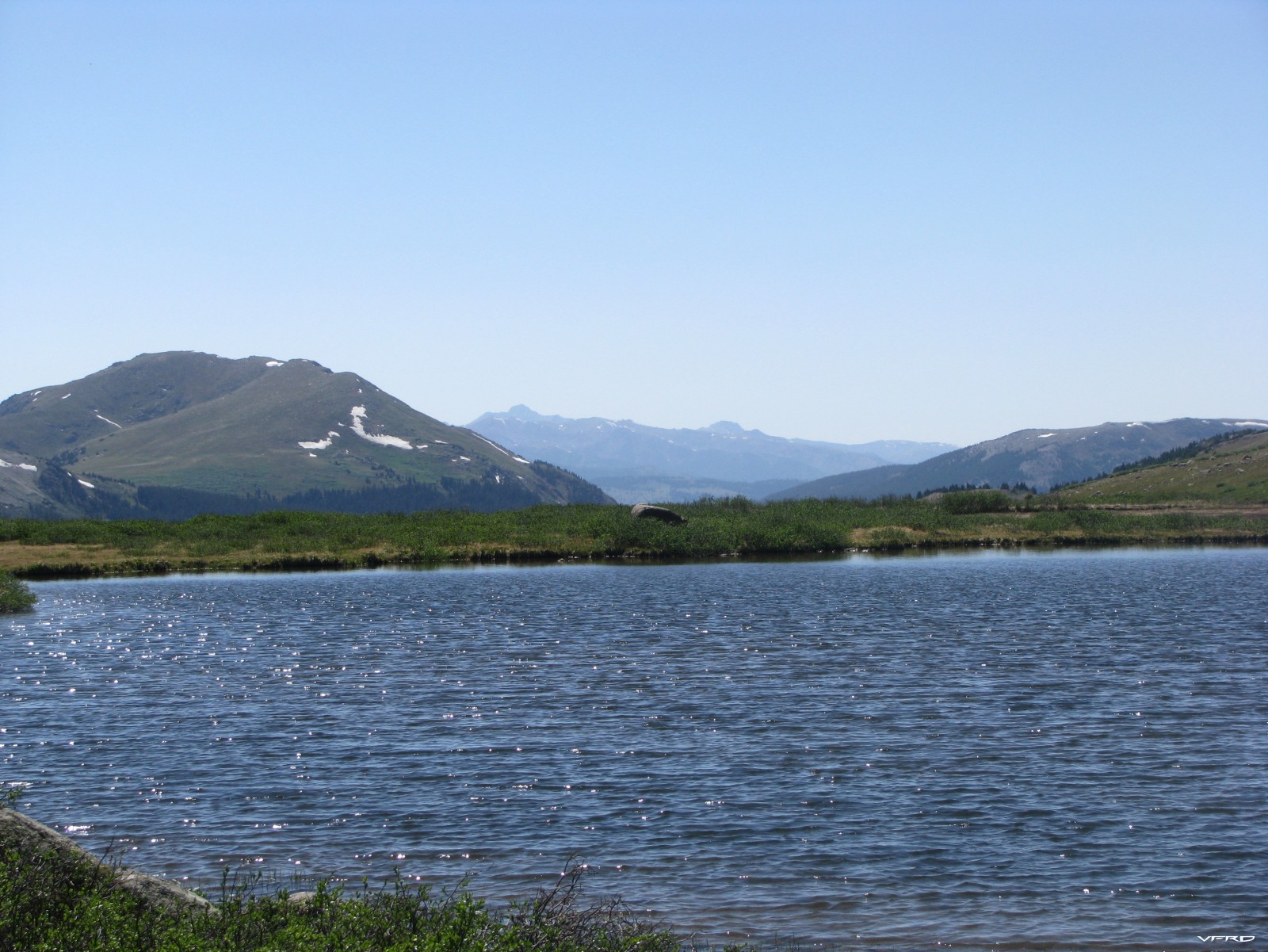 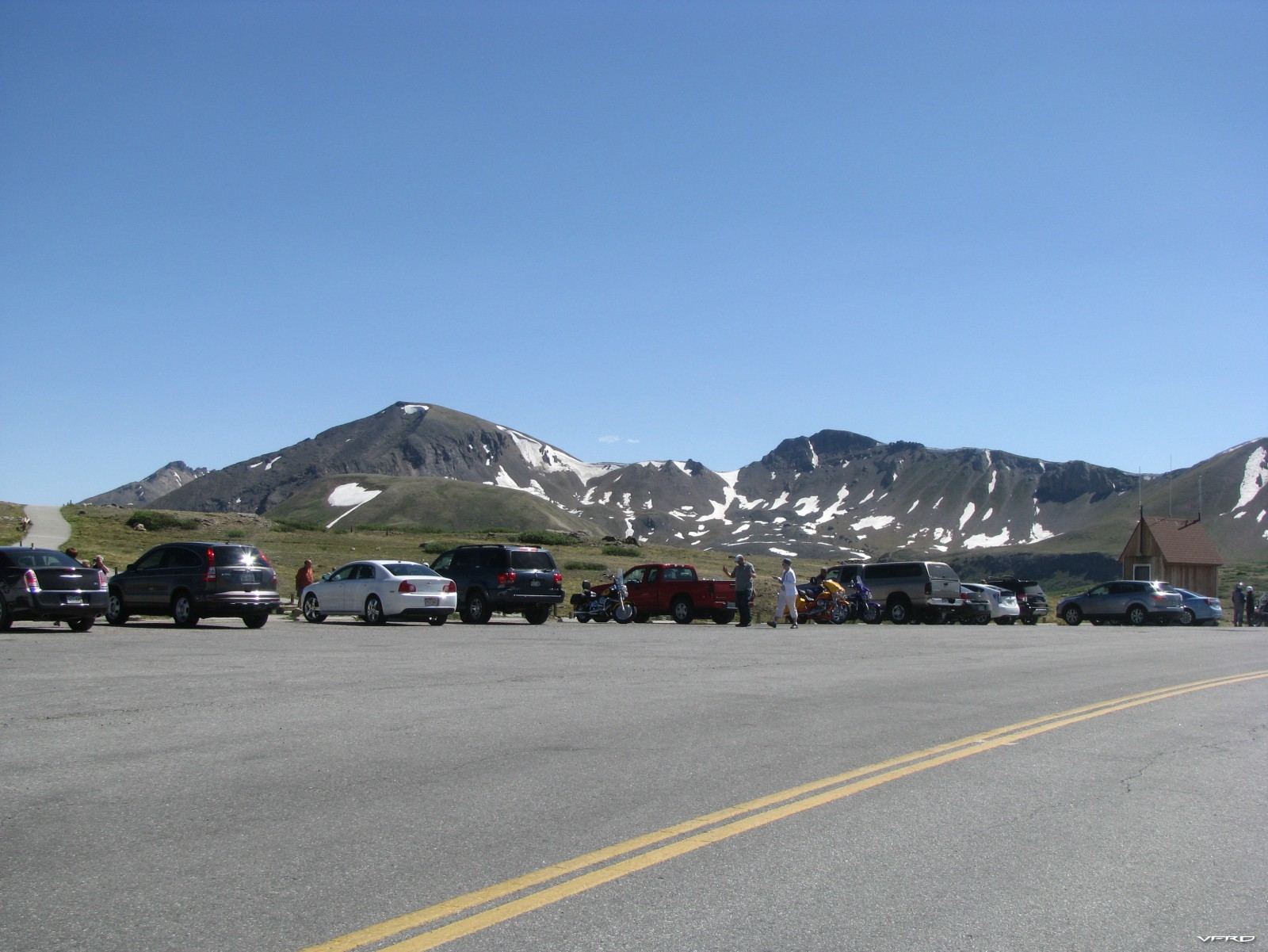 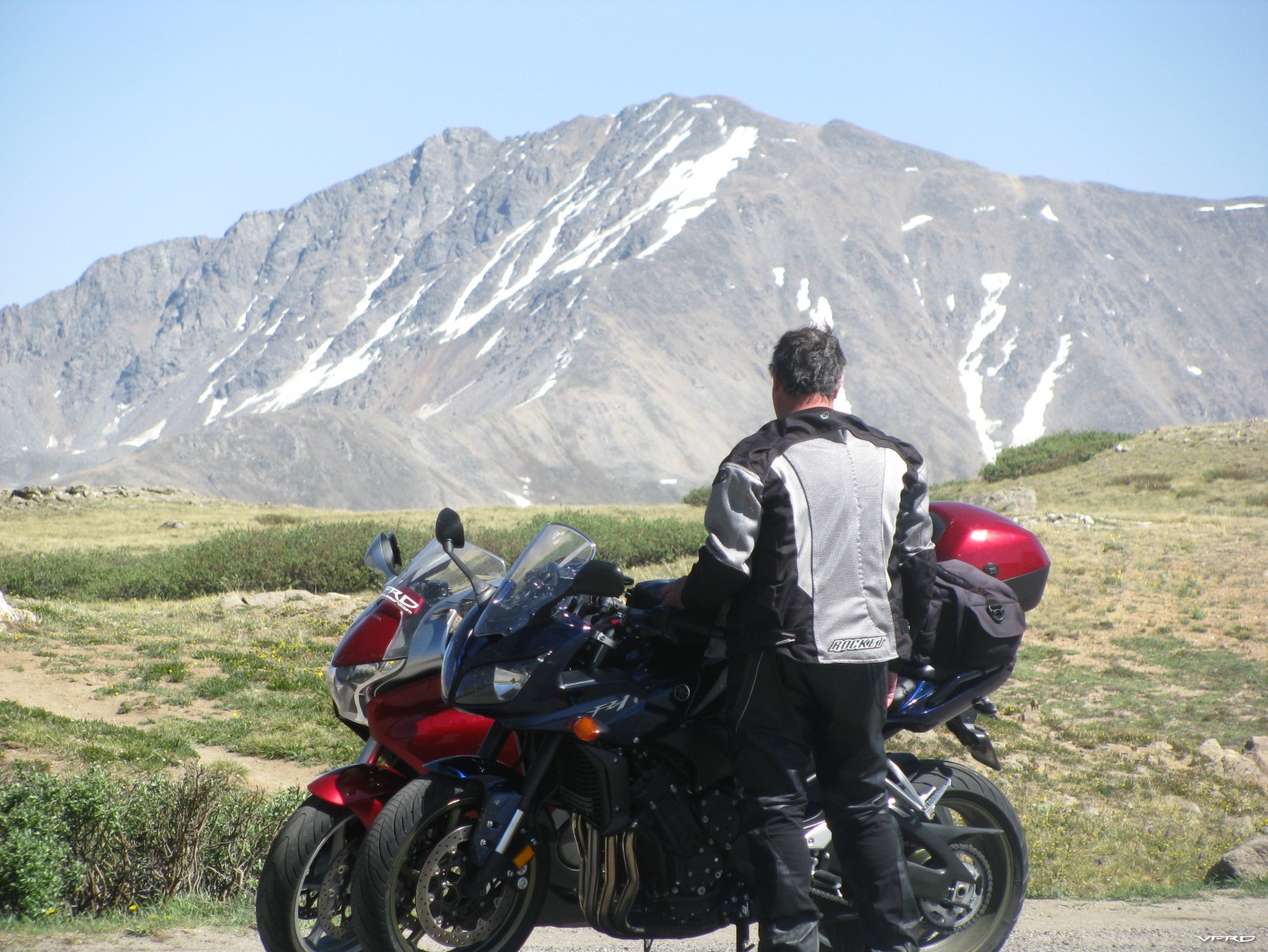