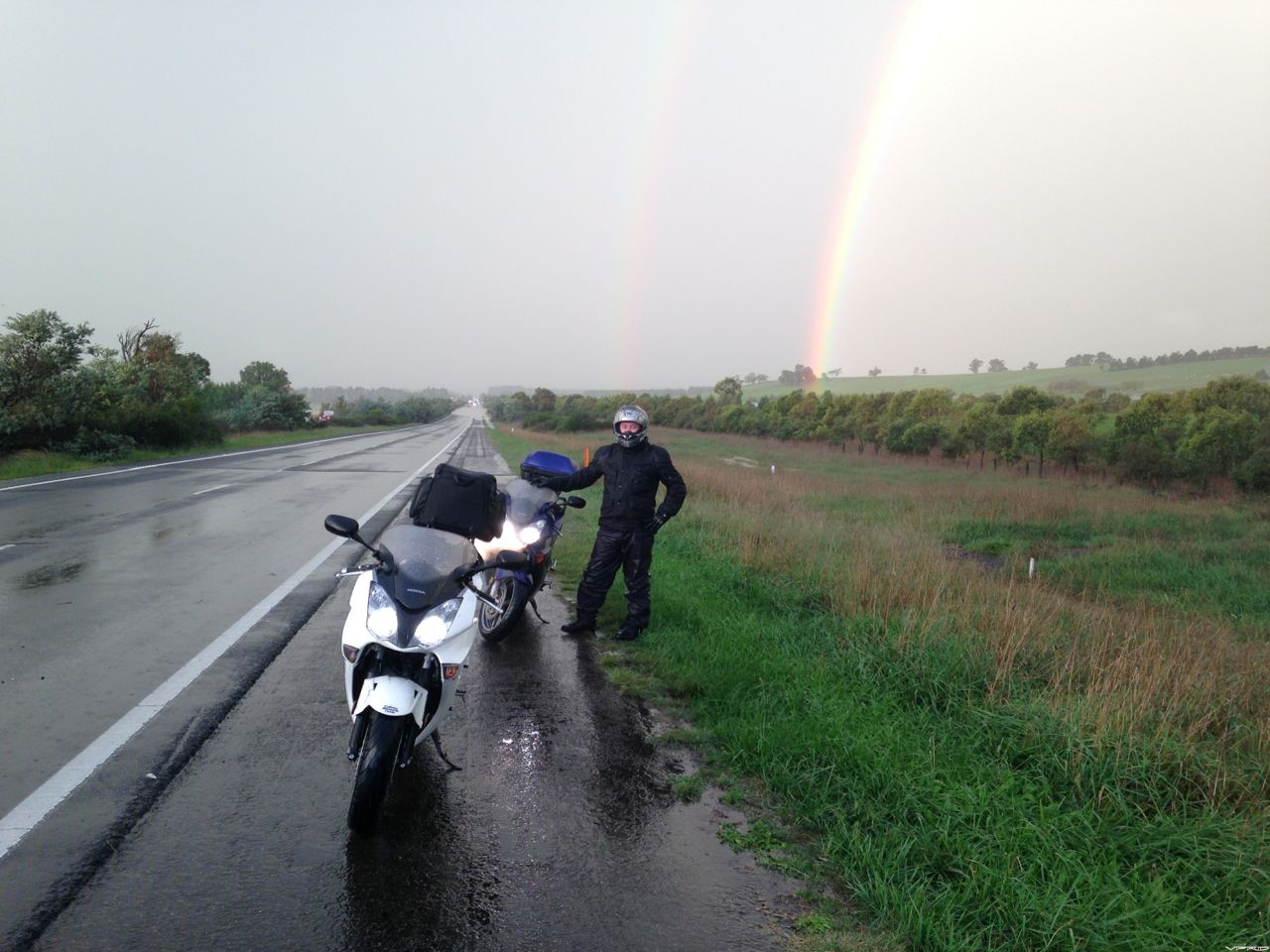 Another Sunday means another ride to Canberra. The weather was warm with some scattered clouds. A pleasant, if dull ride ahead.

I was about forty five minutes from home when I noticed all the cars headed the other way had their lights on. At five in the evening, that wasn't a good sign. About five or so minutes later the road ahead seemed to disappear into a cloud.

I quickly pulled over... rain ahead. As I pulled my rain pants from the top box it started to rain a little. Big drops, but not much. Pants on, I hit the road as it really started to rain. Then about 1km up the road was the petrol station I had planned to pull over at anyway! Ah, well. at least I was dry.

And a fellow VFR rider was just pulling up as well. Not only was it a fellow VFR rider, but a mate from Sydney who has also moved to Canberra. We chatted as we filled our bikes up and geared up for the rain. We decided to ride together, as heading out together was a lot safer into the heavy downpour that the rain had turned into.

The ride, though heavy rain was fairly uneventful for about another half an hour. As we started to clear the heavy rain, the traffic in both lanes ahead started slowing and clearly stopping.

Not wanting to get caught at the end of a line of stopped highway traffic in poor visibility I decided to split up the middle - the main reason so that we wouldn't get flattened when someone didn't pay attention and squeezed at the back of the queue. I also hoped to split right past whatever accident was ahead (conditions as they were, it was pretty likely someone had gone off the road or tapped another car).

At the front was something else... water. Lots of muddy rising water.

The highway was flooding. My buddy came up... "We have to keep going, it's only going to get deeper"

At this point it was over the sole of my boots. And rising quickly. I remembered all those images of cars floating away on flooded highways. "Are you sure?".

We split some way up the road until we were past all of the cars and the flooded highway stretched out ahead of us. But we could also see clear road.

So we did. The bow wave of the truck kept tugging at the front wheel trying to turn the bike. Sometimes we'd ride over the centreline that we couldn't see, but we could feel the cats eyes. A few hundred metres up the road we were out of the water.

We pulled over to check nothing was caught in the bikes. The water had gotten to mid calf, not quite over the tops of my waterproof boots when I was on tiptoe. Riding, it was lapping at my boots on the pegs and the bow wave as we rode through it was at least twice that. We looked back just as the police arrived and shut the road. They wouldn't have let us through I'm sure. Good choice. (or lucky??)

Not long after that the rain stopped and eventually the roads dried. More than an hour late I rolled into my garage to get dry and warm.